The phenomenon of “Amazonization” refers to the wholesale disruption occurring across retail and eCommerce thanks to the leviathan-like presence of Amazon.com. Amazonization represents the spiritual successor to “Walmartization” that occurred across North America in the 1990s and early 2000s.

A darling of the first dot-com era, Amazon’s growth has been particularly profound since 2010 as the company has more than quintupled in value. 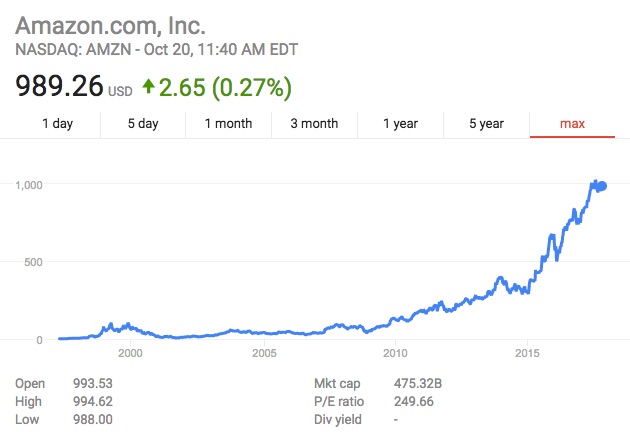 Jeff Bezos and Amazon have a very clear mission. Since quitting his Wall Street job to drive west and sell books, Bezos has been determined to make Amazon the most “customer-centric company on earth,” largely through the practice of personalization.

In his 1997 letter to Amazon shareholders, Bezos wrote:

To this end, Bezos has delivered. Amazon has entirely shifted the paradigm in which we shop and re-defined customer expectations. Because of the scale of programs like Amazon Prime, we can literally have almost any item under the sun at our door in two business days. Amazonization has quite literally made it possible for tens of thousands of city dwellers to ditch their vehicles as nearly any commodity can be ordered online.

Furthermore, the continued innovation of Amazon has forced companies of all sizes to raise their game and in many cases, come in at price points that are a little friendlier to the end-user. As competition grows fiercer, consumers have Amazon.com to thank for the fact that they can now get free shipping from their favorite stores.

The Danger of Amazonization Run Amok

In 2003, the New York Times published a famous op-ed titled: The WalMartization of America. In it, the paper argues that the large chain store followed a pattern of moving into a neighborhood, devastating local jobs and driving displaced workers into low-paying jobs.

While Amazon does not have the same brick and mortar presence, its meteoric growth has altered the retail landscape in several troubling ways. First and foremost, the rise of Amazon has moved many of America’s iconic retailers into borderline irrelevance, as they have struggled to compete. For all their troubles, companies suffering in the “retail apocalypse” are vital employers, responsible for hundreds of thousands of jobs.

Additionally, Amazon’s scale gives it many competitive advantages that many would deem unfair. “Free shipping” is only possible with the insane economy of scale that Amazon touts.

As the online titan searches for a new HQ2, it literally has major metropolises across North America groveling at its feet. The winning city will gain 50,000 quality jobs but only offering Amazon serious tax incentives that amount to a permanent subsidy.

With Amazon’s insane logistics, lobbying and intellectual property advantages, it’s not only department stores that struggle to compete. As Amazon enters the grocery, fashion and potentially even healthcare businesses, several markets will be significantly altered.

Read more: The only book about Amazon’s personalization secrets.