The Bayesian Approach to A/B Testing

Known for being less restrictive, highly intuitive, and more reliable, let's dive into the math behind the Bayesian Approach to statistical inference and find out why.

The applications of A/B testing are age-old and spread across industries, from medical drug testing to optimizing experiences within eCommerce. But as the tools used to make informed decisions based on collected data continue to evolve, so too has the best approach.

Once universally accepted, the Frequentist Approach to statistical inference in A/B testing scenarios is now being replaced by a new gold standard. Also based on the foundation of Hypothesis Testing, the Bayesian Approach is known for its less restrictive, highly intuitive, and more reliable nature. While Dynamic Yield has already written about our feelings on the matter, my goal is to dive into the numbers behind the Bayesians school of thought, performing the appropriate derivations where necessary.

In a Bayesian approach, everything is a random variable, and by extension, has probability distribution and parameters.

In Frequentist, if we want to model the click-through rate of a group, we try to find its mean and its variance, which act as the parameters. And to find these parameters, we collect sample data, write down likelihood, and then maximize it with respect to the parameters. We go on to build confidence intervals around this Maximum Likelihood click-through rate to quantify the uncertainty around where the real mean would lie.

In Bayesian, the real mean is a distribution, but the observations are fixed, which models real life behavior much better. To be more precise, in the case of a Bernoulli distribution, the probability mass function (pmf) is defined as:

with π being the probability for clicking.

Here, according to the Bayesian approach, π should also have a distribution of its own, its own parameters, etc.

To calculate the mean click-through rate, similar to the Maximum Likelihood mean value in a traditional A/B test, we try to solve for the value π in the below equation:

Where X = the observed data.

Here, p(X) can be treated as a normalizing constant, given its independence from π.

Let’s see how exploiting this concept helps us solve the posterior probability for both continuous and binary variables.

As we are dealing with a Bernoulli distribution, we only have to deal with one random variable (π). Assuming our likelihood function follows a prior-beta distribution:

Also assuming the experiment begins with no prejudice, a beta distribution for the prior with α=1; β=1 would be a good starting point as beta (1,1) is a uniform distribution:

We can see the posterior is simply a beta distribution of the form:

Which is the same as our prior probability distribution:

To solve for a posterior probability for binary outcomes, the blueprint would be:

The following code, implemented in Python, will allow you to more easily visualize the progression, effectively demonstrating how the Bayesian probability changes over time as the number of samples increase

The progression of π over time can be seen as: 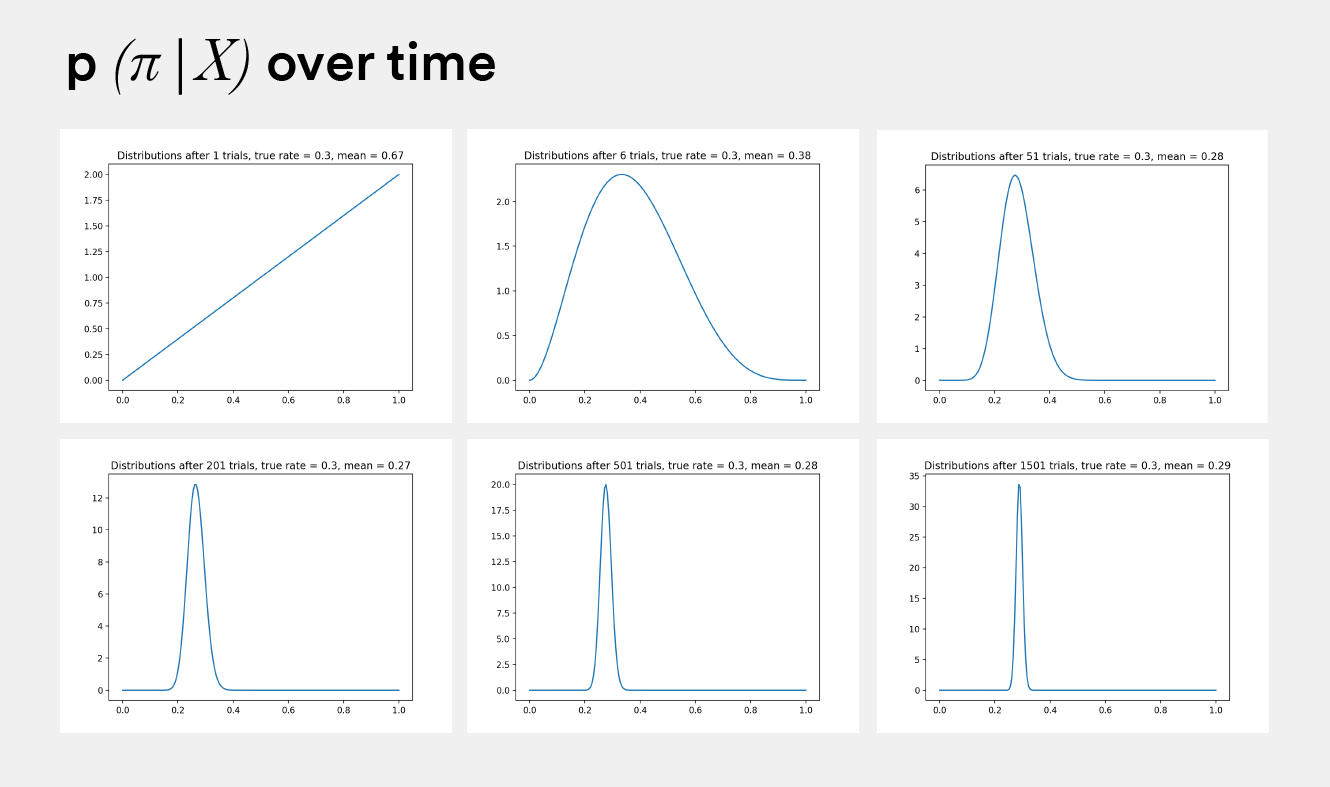 While the binary variables cover events like click-throughs, some of the A/B testing is done on continuous variables such as revenue, order value, etc. We would follow a similar path as laid out for binary variables and exploit the concept of conjugate priors. But instead of working with a beta prior, we will now work with a gamma prior and normal likelihood function, resulting in a gamma posterior.

For optimizing metrics that are discrete, such as the number of purchases, pageviews, and so on, we work with a gamma prior and Poisson likelihood. Again, resulting in a gamma posterior.

Imagine you are at a casino and out of two slot machines, you pick one and win 3/3 times played. What would your next move be? Would you continue to play with the machine that has proven to win or try the other one?

This situation precisely sums up the Explore-Exploit dilemma – the choice between gathering more data and maximizing returns, which we already described closely applies to A/B testing.

In a traditional A/B test, because you assign a percentage of the traffic, there is no option to exploit the data, i.e. incrementally assign more traffic to the winning variation.

Let’s see how this is accomplished in a Bayesian setting.

In short, sampling completely takes care of the Explore-Exploit dilemma for us in a Bayesian test. Say you have distributed traffic randomly between two variations (blue and orange) and reached the following posterior probability distribution for both:

As can be seen, the orange variation is clearly sampled much more than the blue variation. And how do we acknowledge this? The variance! We saw earlier that a posterior probability gets skinnier with more sample data, so given that the blue variation is still chubbier, we can conclude it is not sampled enough.

At this point, if we decide to randomly sample two points, one from each variation, and compare them both, what are the chances the orange variation would be higher?

What happens if we decide on the variation to show next based on which has the higher value in this random sampling?

→ If the blue variation wins, it would then be shown next to the audience, furthering its sampling while also narrowing around a fixed probability for its true mean value. Here, we see two additional possibilities:

Therefore, sampling takes care of the Explore-Exploit dilemma for us, always making the best decision on our behalf.

Once the posterior distributions are mapped for the variations, to conclude a winner, you sample a large amount of observations. Hypothetically, let’s say you sample 1000 times from two variations and 999 times out of 1,000 you see the orange variation having higher probability: 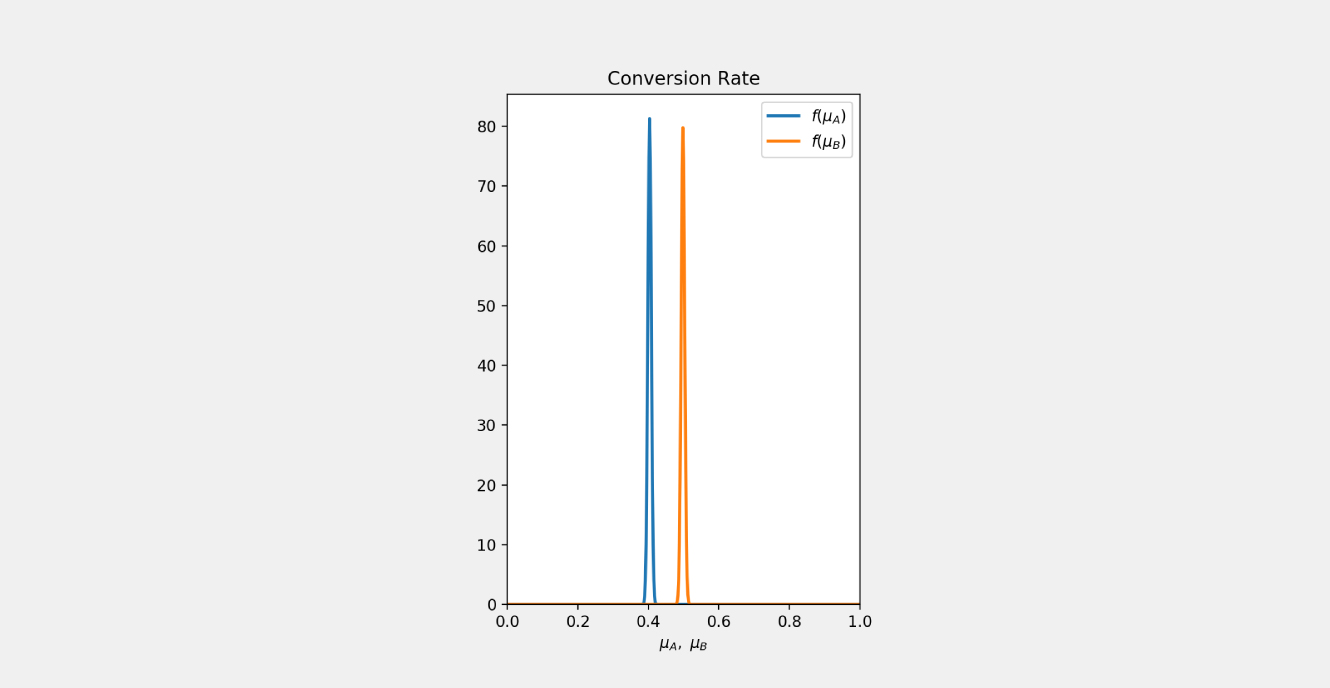 At Dynamic Yield, we sample 300,000 times from every variation to calculate the Probability to Be Best (P2BB).

If you’d like to learn more about the issues presented in the Frequentist Approach, check out this blog post.