Choosing the right optimization KPI for your A/B tests

By addressing some common A/B testing pitfalls and introducing more reliable approaches to measuring the efficacy of your experiences, you can be sure to optimize for success.

For data-driven marketers looking to improve their site’s user experience, A/B testing is one pillar of experience optimization used to help increase conversion rates. Relied on as a way to experiment with large and small changes before going “all in,” it is an important tool for deciding what experiences get applied to all users.

Therefore, not analyzing the results properly could mean the difference between potentially massive uplifts and diminishing returns.

By addressing some common A/B testing pitfalls and introducing more reliable approaches to measuring the efficacy of your experiences, you can be sure to leave here knowing how to optimize for success.

Marketers have gotten very used to setting Conversion Rate as a main KPI, but when it comes to testing, it simply does not tell the whole story. While Conversion Rate means the number of unique users that converted, your business goals should be set up for more conversions, not necessarily more convertors.

Look at the table below, and ask yourself, which variation performs better?

It is safe to say that Variation A performed better, resulting in more conversions and an uplift of 25%. So, even though it might be easier to think about percentages than small fractions, is it worth losing out on the meaningful data?

To conclude: If your objective is an action that can only be done once, like registering to a site or becoming a newsletter subscriber, Conversion Rate and Conversions per User should show the same result (one with percentages and the other with fractions). However, if the objective is to add an item to a cart or purchase, Conversion Rate is an inferior metric, as it assumes you’re looking for convertors and not conversions — and multiple conversions by a user do not weigh more than a single conversion.

Average by Users, not Sessions

Google Analytics taught us to analyze behavior through the prism of Sessions. For instance, an eCommerce brand measuring revenue would look to RPV (revenue per session), and a media site, average number of pageviews per session.

However, if you’re choosing the variation once for each user, you should average results by number of users. Averaging by sessions will many times result in a bias in favor of the worst variation.

Would it make sense to punish Variation A, which ultimately produced more conversions because it led to an additional session that had a small number of conversions?

To conclude: If you’re comparing two alternatives, averaging results by users, and not sessions will allow you to optimize for a better user experience on your site.

When performing a test, you usually have one metric in mind that is the primary — the winning variation will be determined by the success of each variation for this metric. This can include any user activity, such as clicking a specific button, adding items to the cart, completing a purchase, etc.

A marketer for an eCommerce site once asked:

“Why do you allow so many metrics to choose from? I only need one: Revenue.”

As with any business relying on revenue, it makes sense as an approach that everything contributing to this goal would be good, and everything negatively impacting it, bad. However, conversion funnel methodology contradicts this model for thinking as each step of the funnel is aimed towards advancing the user to the next step in the funnel, meaning results should be optimized accordingly.

Here’s a simplified version of an eCommerce site conversion funnel. 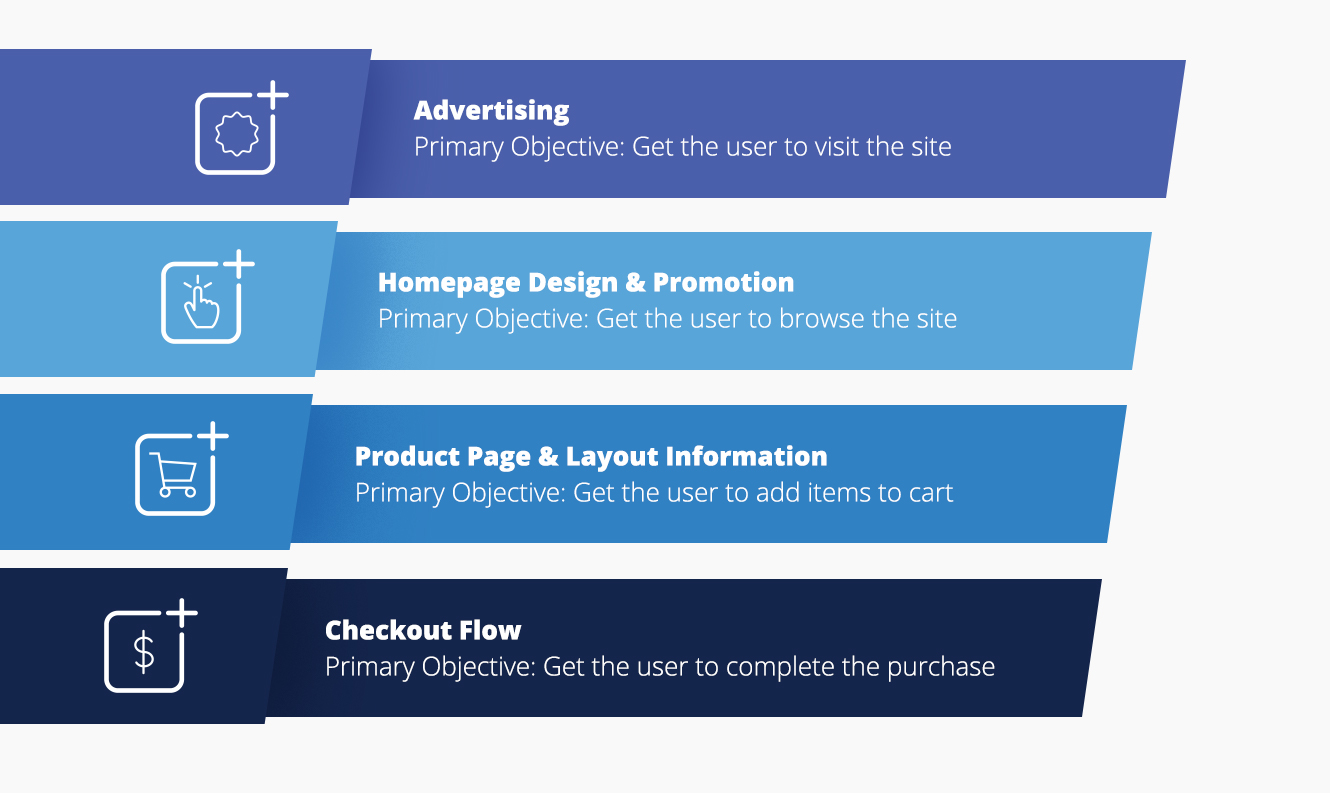 After analyzing tests run earlier in the conversion funnel on a new homepage navigation element of an eCommerce site, after seven days, this became quite obvious:

There is no clear winner yet for the primary metric, as the number of purchases was too small. Though, when looking at clicks, enough data was collected to determine Variation A as a winner. And so we see the mathematical reason to select a closer, less delayed conversion.

Hence, the difference between their performance will be small.

This is what we refer to as Immediate Reward and Delayed Reward.